I’ve been a bit under the weather the last couple of days so I didn’t dress up for Halloween this year.  I’m totally bummed about it, but to make up for it, here are some of my favorite costumes from years’ past: 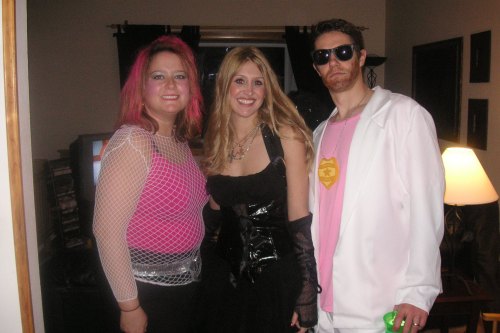 Lindsey and I went as Axl and Slash for Halloween Bunco 2 (?) years ago

Erin, Jeff, and I went as 3s Company last year 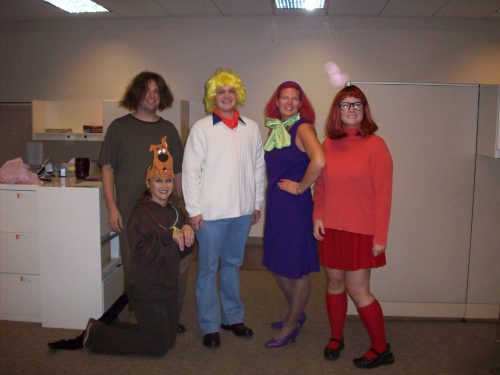 There are LOTS more costumes from Bunco and other things, but these are my faves from Halloweens past

Welcome to the Blogroll…

My online BFF Lesley Cooper Pollard has started her very own blog, cleverly titled The Coop Scoop by yours truly.  Check it out for Lesley’s unique perspective on life–including orange vests, soap “oprahs,” and Halloween candy.

P.T. Barnum antics aside, I wanted to share this website with you.  As you may recall, I’m a fan of Microsoft’s “I’m a PC” campaign.  And I like web sites with user-generated content. So it’s only natural that I’d enjoy I’m a Real American 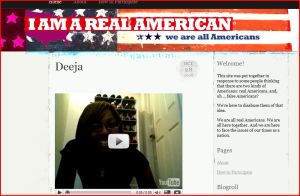 From the “Welcome” section:

This site was put together in response to some people thinking that there are two kinds of Americans: real Americans, and, uh … false Americans?

We’re here to disabuse them of that idea.

We are all real Americans. We are all here together. And we are here to face the issues of our times as a nation.

I’m considering contributing to the site… Drhuv already stole my “I hate tunafish” line, so what would mine say?

“Hi, I’m Cari. I’m worried about education, the war, and the economy.  And I’m a Real American.”

Any other thoughts? What would yours say??

To All the Jobs I’ve Had Before

I’ve learned a lot in these seven years—I’ve learned how to get up (almost) every morning and get to work on time. I’ve learned a lot about marketing in a non-profit, association environment and how to navigate office politics. I’ve worked with a lot of smart people and have come to appreciate and respect the increasingly difficult environment in which teachers teach and students learn.

Thinking back on what I’ve learned in my current job made me realize I’ve learned something from every job I’ve had including:

Field worker— Hands down the best job I ever had. I got a tan, hung out with my friends, and thought $400 was a TON of money. I learned important lessons about hard work and being dependable as well as all the words to Sir Mix-a-Lot’s “Baby Got Back.”

Waitress— I worked as a waitress at a buffet restaurant, so it was easy in some respects (not a lot of orders to remember) and hard in others (why should we tip you?)  I learned the importance of staying calm under pressure, smiling for tips and how to re-stock a salad bar. I also learned the tale-tell signs of bulimia, but that’s another story.

Temp office worker—Probably the best training for the “real world” I could’ve asked for. On summer and winter breaks in college, I worked as a temporary office worker, doing mostly clerical jobs. I had a couple of long-term assignments; one at a medical review organization and one in a law firm. Sure, I did my share of typing and filing and miscellaneous “grunt” work, but I learned a LOT of valuable lessons about office culture and politics as an “outsider” looking in.

Grocery store cashier—In addition to a fail-proof method for selling beer to my under aged friends, I learned to guess what people were making for dinner by the ingredients they bought. I also learned those little numbers on produce. I still know that 4017 is Granny Smith apples and bananas are 4011.

Telemarketer—I worked as a telemarketer in college, soliciting university alumni for donations. Since I wasn’t making collection calls or selling people stuff they didn’t want, it wasn’t as bad as I imagine some telemarketing jobs might be. The #1 thing I learned was how to build rapport. The more I could chit-chat with the alumni, the more likely they were to pledge to the University. To this day, I draw upon some of those skills when necessary. I’ve yet to receive one of these calls, however, even though I *guarantee* I would give.

Office cleaner— This definitely ranks as the least “glamorous” job I’ve ever had, but it wasn’t as bad as it seemed. As long as I had the job finished by a certain time, I could come and go as I pleased. It made me realize, however, how trusting companies can be. Here I was, a 22-year-old college kid and I had the keys to EVERYTHING… Luckily, I’m a trustworthy type, and I’m sure the company was bonded, but STILL.

Real estate assistant—I think this may have started as part of a temp agency job, but it grew into one of the best jobs I’ve ever had… and one of my biggest professional regrets. I was the right-hand man (er..woman) to a really successful real-estate agent in the Bloomington-Normal area. I did all of the marketing for her and learned how to cultivate clients. I also royally screwed her over when I left… and learned a valuable lesson about not burning bridges.

The season finale was tonight. It was amazing.  ‘Nuff said.

You know how the best part of riding a roller coaster is the ability to scream at the top of your lungs for no apparent reason?  That’s exactly how I felt attending the New Kids on the Block concert this weekend.  I’m almost embarrassed to say it, but it was a REALLY good time… and they put on an extremely entertaining show.

Like everything else, it was made even more entertaining by the people we were with.  I’ll post all the photos on my facebook and MySpace pages, but here are a few highlights…

We decided to don wigs and jam out to NKOTB the whole way there.  The toll booth guys loved us!

Kari and Kim in their wigs

We made t-shirts.  On the front it said: “Cover Girl” on the back, each of us had the name of one of the New Kids.  I got Joey, even though Donnie has always been my favorite.

From the back: Joey, Jon, Donnie, Danny, Jordan

Like I said, they put on a spectacular show.  It was well worth the $90/ticket we paid.   They played all of their hits and a few of their new songs.  Joey and Jordan sang songs from their solo careers.  Once you got past the fact that 35-to-40 year olds were onstage singing hits from 15 years ago, it was really fun.  The crowd was soooo into it and I just kept thinking about how awesome it must feel for these guys to still play to such an enthusiastic audience.

It was great because even though the New Kids pulled out songs and dance moves from 15 years ago, they had a sense of humor about it.  At one point Joey said: “No need to fight over us anymore, ladies… It’s okay for 2 girls in the same group to like Jordan.”  Which was, of course met with thunderous applause. 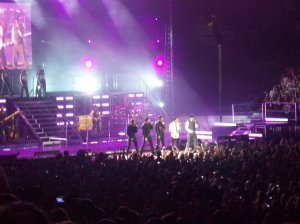 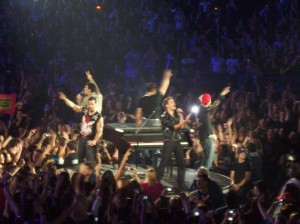 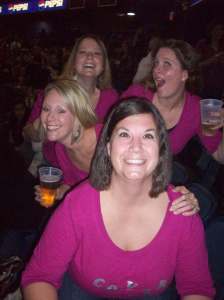 The boys in white

The Boys from Boston--amazing encore!

We decided that the reason NKOTB was more fun this time is because a) we can now drink beer and b) we didn’t have our moms with us!  Judging by our post-show antics, maybe we did need some “adult supervision.”  Two noteworthy things happened.

1) We met Beau from Tila Tequila.

Kari recognized him in the hallway before the show.  We weren’t sure if it was him (I didn’t even know who he was), so Kim yelled “Beau” really loud.  He turned around and we all screamed like schoolgirls. Amazingly enough we saw him after the show and were able to snap this photo: 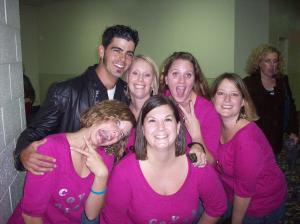 2) We unsuccessfully tried to get backstage.  And on the tour bus.

Erin & Kim trying to gate-crash. The security guard was not amused.

It was a super-fun trip.  With this group of girls, I’m not surprised we had a good time, but I was surprised at how much I thoroughly enjoyed the show.  I’d do it again in a heartbeat!!

In honor of Halloween, I thought I’d feature one of my favorite costume photos this week.

This photo was taken for Bunco.  The theme that month was celebrities.  Jacqui is Gretchen Wilson, Erin is Pink, Kristi is Katie Holmes, Lindsey is Peg Bundy, and I’m Dolly Parton.  It’s probably 2 or 3 years old now, but it’s still one of my very favorite costumes!

Carich Blogs
Create a free website or blog at WordPress.com.