Well, On Thursday, I was lucky enough to re-connect with Jess in person–after 10 years!!  She was in Chicago visiting family, so our friend Kelly and I drove in to meet her.

We had some beer, some Chicago-style pizza and lots and lots of laughs.  We were able to reminisce about the “good ole” days and I was able to meet her partner Kirsten, who is a doll.

The only thing missing from this reunion was our other friend (and now my sister-in-law) Jo.  She lives in Southern Illinois and couldn’t get off work, but we called her so that she could at least feel like she was part of the festivities.

Kelly and I-- self-portrait!

The girls of Hewett 6 (minus Jo)

How does your garden grow??

Well, we’ll see.   Operation: Get a Green Thumb is underway.

A couple weeks ago my mom, brother and sister-in-law came to help me plant flowers.   And by “help” I mean they did it all for me.  My mom researched and bought a pre-planned assortment of plants. 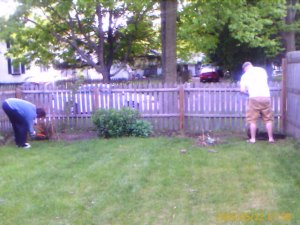 Mom and Ryan getting started 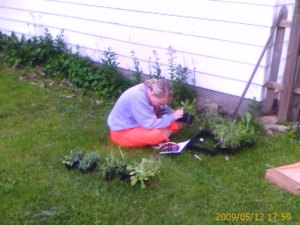 Jo puts the plants in order

working the dirt (as I take pictures)

Roxie gets in on the action 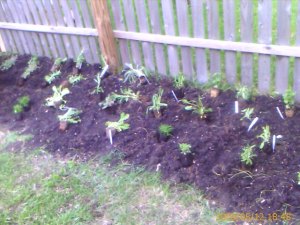 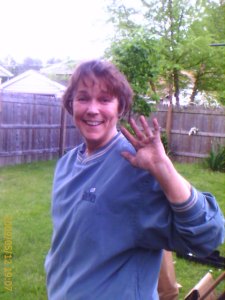 I spent a bunch of time working outside this weekend.  Stay tuned for more pictures of the progress!

————————-
The title of this post obviously comes from a nursery rhyme.  But it also reminds me of my friend’s brother who, when we were about 8 or so made up this little ditty:

Cari, Cari, Quite Contrary
Shave those armpits
Oh so hairy

but I *LOVE* re-reading my old blog posts.   I totally forget some of the things I’ve done/said/thought/saw.

Then again, I like looking at old pictures of myself, too.    I think that “you’re so vain” song must be about me.

Foto Friday: Killer Dog (not for the faint of heart)

It’s official:  Roxie is a killer.

Last night, I got back from my run and left the door propped open for Roxie so she could go outside and play  while I was on the phone (or pee or whatever she does out there).  I heard a loud squeak and thought maybe she had found one of her toys in the yard.   And then I heard it again and thought maybe it was her squeaking.

I go outside to take a peek and she’s “playing” with something… something alive!  I think it’s a mouse, so I try not to look.  Then realize it’s a baby bunny.  Roxie is pawing at it and then puts it in her mouth.  She is so proud.

I couldn’t bear to watch, so I go back inside….  But here’s a post-mortem shot of Roxie’s latest victim:

It took two Ziplock bags, a garden spade and lots of gagging for me to properly dispose of him.  RIP little buddy…

Lisa was kind enough to post some photos of our Minneapolis trip, so I’ve decided to do like they do with DVDs and offer some “never before seen” bonus features:

Ate some killer Malaysian food in MPLS.  Heard a great (albeit very broken) story about a fire in a Malaysian place in Chicago. 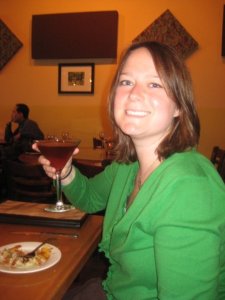 Drinking a pomegranate concoction at the Malaysian place. Lisa got a Woo-Woo

Witnessed and responded to an on-the-job accident. Not real common in my line of work. 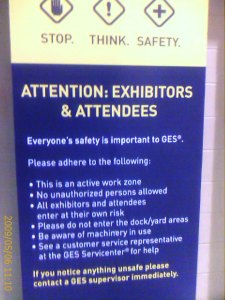 Sign warning us that such accidents may occur. Taken well after said accident

Took a photo next to a statue of Mary Tyler Moore. 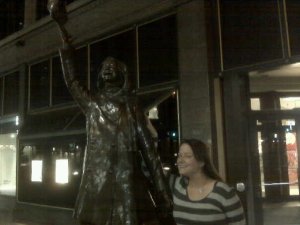 She turns the world on with her smile--post tipsy shopping and wine-fueled dinner.

Met (and held!) another newborn baby

Check out the cute little flip-flops I got for Rush...

Lisa and I at the graduation party

I wish I had taken pix of the teacher freebie pandemonium and the Mexican wrestling.  However, some things are better left to the imagination.  A couple more points:

I know the “too busy to blog” excuse is getting lame.  But it’s true.  I was hoping to write some proper blog posts, but since some of you like lists (shout out to Harley Quinn— I loved your last comment!), I figured I’d save myself the trouble of actually having to write anything.

In the last week and a half or so I: