You know how the best part of riding a roller coaster is the ability to scream at the top of your lungs for no apparent reason?  That’s exactly how I felt attending the New Kids on the Block concert this weekend.  I’m almost embarrassed to say it, but it was a REALLY good time… and they put on an extremely entertaining show.

Like everything else, it was made even more entertaining by the people we were with.  I’ll post all the photos on my facebook and MySpace pages, but here are a few highlights…

We decided to don wigs and jam out to NKOTB the whole way there.  The toll booth guys loved us!

Kari and Kim in their wigs

We made t-shirts.  On the front it said: “Cover Girl” on the back, each of us had the name of one of the New Kids.  I got Joey, even though Donnie has always been my favorite. 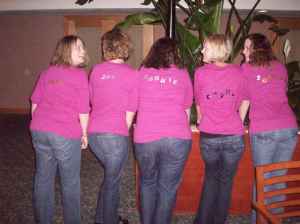 From the back: Joey, Jon, Donnie, Danny, Jordan

Like I said, they put on a spectacular show.  It was well worth the $90/ticket we paid.   They played all of their hits and a few of their new songs.  Joey and Jordan sang songs from their solo careers.  Once you got past the fact that 35-to-40 year olds were onstage singing hits from 15 years ago, it was really fun.  The crowd was soooo into it and I just kept thinking about how awesome it must feel for these guys to still play to such an enthusiastic audience. 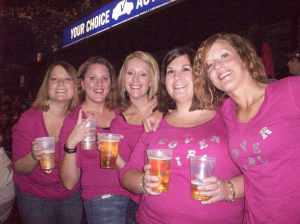 It was great because even though the New Kids pulled out songs and dance moves from 15 years ago, they had a sense of humor about it.  At one point Joey said: “No need to fight over us anymore, ladies… It’s okay for 2 girls in the same group to like Jordan.”  Which was, of course met with thunderous applause.

The boys in white

The Boys from Boston--amazing encore!

We decided that the reason NKOTB was more fun this time is because a) we can now drink beer and b) we didn’t have our moms with us!  Judging by our post-show antics, maybe we did need some “adult supervision.”  Two noteworthy things happened.

1) We met Beau from Tila Tequila.

Kari recognized him in the hallway before the show.  We weren’t sure if it was him (I didn’t even know who he was), so Kim yelled “Beau” really loud.  He turned around and we all screamed like schoolgirls. Amazingly enough we saw him after the show and were able to snap this photo:

2) We unsuccessfully tried to get backstage.  And on the tour bus. 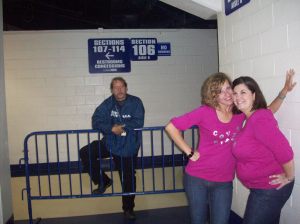 Erin & Kim trying to gate-crash. The security guard was not amused.

It was a super-fun trip.  With this group of girls, I’m not surprised we had a good time, but I was surprised at how much I thoroughly enjoyed the show.  I’d do it again in a heartbeat!!